Because it's far too loud

(What, you had a nefarious reason to hack it? I just wanted to sleep.)

The HP BladeSystem is a now fairly dated blade enclosure.
I used to run one in my bedroom - someone told me I should try keeping the cloud closer to home - and sleeping wearing ear defenders gets old after a while.
What to do? There's no way to configure the fan curve and they can hit 18,000 RPM.

Let's look at the firmware

The firmware for the bladesystem enclosure manager is available online. This vulnerability requires OA firmware <= 4.80.

Use binwalk -e on the firmware image to extract the multiple squashfs filesystems' contents.

I already have an idea of where I want to look: I know the firmware upgrade process for the blades involves loading an SPP iso on the onboard administrator and unpacking the firmware from it.
I had a guess there might be some sort of unsafe extraction along the lines of zip slip - but for an RPM or HP SCEXE format instead - and looked for the code which handles this.

The majority of HP's custom binaries and scripts for the OA can be found under the sbin folder in the first squashfs squashfs-root\sbin. fw_mgmtd is responsible for running firmware updates, and runs as root. To try to find more information about scexe unpacking, let's grep for that.

Looks like it calls unpack-scexe, which is a script. Nice! No need to disassemble to work out what this is doing.

Oh dear. It runs the supplied .scexe file as a script. Let's try replacing the HP supplied update with a shell script of our own choosing.
The Linux install on this is extremely stripped down, no passwd command here.

Replace/add it at this path hp/swpackages/root.scexe. Put the new SPP ISO somewhere accessible by the OA, either on an HTTP(no S) server or on an ext2 partition on a flash drive plugged into it.
Use the web UI to start firmware management.
Wait for it to fail the iLO upgrade step with Unable to locate and/or unpack SCEXE/RPM HPE SmartComponents. OA/iLO will not be updated.
SSH in with username udog password compaq. 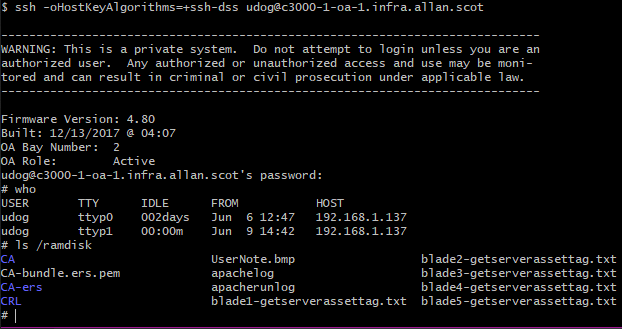 Now to finally slow down those fans

Patching the thermal management code to use a different fan curve is probably the more correct way of fixing this, but that's a more involved process for another post if I ever run a BladeSystem again. A simple fix which sets the fan speed every 10 seconds on a loop worked fine for me. The fan binary this calls is already provided by HP.

A little crude, but functional.

Responsible Disclosure, HPE, and the Onboard Administrator as a juicy target

HPE don't operate a public bug bounty program, and provided no compensation for reporting this issue. It is likely there are other security issues with the Onboard Administrator - the very first thing I looked at as a plausible escalation path worked, which doesn't bode well - but don't have much incentive to look into them as I got what I needed and can control the fan speed. Keep any Onboard Administrator safely isolated from anything less trusted than it as getting root on it means full access to:

The particular vulnerability here requires someone to already have access to an account with permissions to trigger firmware upgrades, but it is very plausible that a path starting with anonymous access to here exists.